Hello and happy spring, everyone!

Hope permeates the air as the rain refreshes the ground, the grass becomes greener, the buds appear on the trees and tulips and daffodils bloom – a sure sign of warmer, sunnier days to come.

Hope is the confident expectation of coming good.

It’s not a wishy-washy sentiment synonymous with “maybe,” but a deep-seated certainty. A knowing. It’s similar to how we know the longer days and warmer weather of April will produce new life.

It’s not just bird songs and warm breezes that make this such a hopeful time of year. I truly believe that the events of one spring thousands of years ago still reverberate throughout the centuries: the shedding of the Passover Lamb’s blood and the miracle of the empty tomb.

Passover is my favorite holiday. My heritage is both Jewish and Christian, a modern-day picture of the cultivated and wild olive tree growing as one.

When I say Passover, I also mean Easter, as the two holidays are inextricably linked. There is no Easter without the Passover, and Passover is truly a celebration of Jesus’ death and resurrection.

For millennia, the Jewish people prophetically declared Messiah’s work at Calvary by re-telling how the blood-marked doorframes of our homes caused death to pass over us and bring about our exodus from Egypt. In the same way, Jesus’s blood sprinkled on the doorframe of our hearts causes death to pass over us and leads us from the land of bondage to sin into a land of freedom and life. 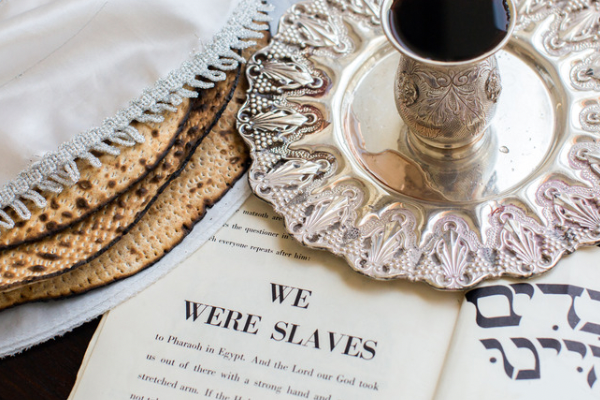 The Apostle Paul wrote about this miraculous deliverance in Romans 8:1-2: “Therefore there is now no condemnation for those who are in Christ Jesus. For the law of the Spirit of life in Christ Jesus has set you free from the law of sin and death.”

Or, as Francois du Toit wrote in The Mirror, his paraphrase of the New Testament, “Now the decisive conclusion is this; in Christ, every bit of condemning evidence against us is cancelled. The law of the Spirit is the liberating force of life in Christ. This leads me with no further obligation to the law of sin and death.”

This is just the beginning of the good news of the Gospel. Our freedom from sin and death through Jesus is the entry point to life in the kingdom of God – a kingdom marked by the presence of righteousness, peace and joy. A kingdom where sin, sickness, fear, guilt and shame have been utterly defeated. A kingdom of which I am not just a surveyor and partaker, but an ambassador and co-heir (Romans 8:17).

We are sons and daughters of this kingdom’s King.

It’s commonly observed that land farmed by those who own it produces multiple times more than the same land worked by serfs and slaves. Likewise, slaves and serfs produce far more when freed.

The power of the cross and the empty tomb release me from slavery into sonship.

As I rest in my identity as a possessor of the living promise, as an heir instead of a slave, the production of kingdom fruit in my life skyrockets.

A year ago, when the initial travel ban was announced – before we knew all that 2020 would entail – the Lord asked me a familiar question from the Passover Seder, “Mah nishtanah, ha-laylah ha-zeh, mi-kol ha-leylot?” (Why is this night different from all other nights?)

As I responded with the answer learned in childhood, “Because we were slaves and now we are free,” God showed me that we are on the verge of the greatest exodus humanity has ever known.

We will see more people move from slavery to freedom, from death to life, than has ever occurred in world history.

Some have called this the billion soul harvest. Others talk of the greatest revival. All I know is that there is a global awakening to the reality of Christ’s victory occurring and we get to be a part of it.

God is inviting us to pray and partner with heaven in this great exodus. What a privilege to be chosen to live in this time in history! The hope of new life truly abounds.

As we open up our homes to the fresh breeze of April, I encourage you to do a little spiritual spring cleaning. Join me as we pray that the fullness of what Christ won at the cross goes a little deeper into our spirit, soul and body. Ask that the blood of the Passover Lamb touch every facet of our lives.

Keep your eyes fixed on Jesus until the tangible hope of the empty tomb fills every part of you.

We were slaves. Now we are free.